A number of areas are selected in the Belgian part of the North Sea to protect the endangered species and habitats: 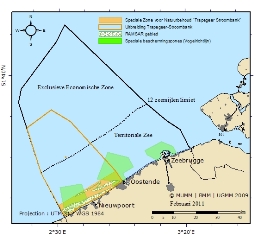 • the RAMSAR area “Western coastal banks” lying between Oostend and the French border to a depth of 6 m that is designated for the scoters and grebes (Melanitta nigra, Melanitta fusca, Somateria molissima and Podiceps cristatus) that live there;

Policy plans are drawn up for these areas. The Marine Environment service works with scientists and stakeholders to draft the conservation objectives (for which a scientific report is prepared) and to design measures to improve the condition of the endangered species, the sandbanks and the reefs.