BIODIVERSITY OF THE NORTH SEA

The North Sea is home to a rich biodiversity. It is teeming with life: from sea anemones and seahorses through cod and porpoises to seals and many species of algae. In total, more than 2,000 animal and plant species live in the Belgian part of the North Sea, which also houses Belgium's largest nature reserve. We divide them into benthic and pelagic species, marine mammals and seabirds. The North Sea also includes some important habitat types such as sandbanks and gravel beds. 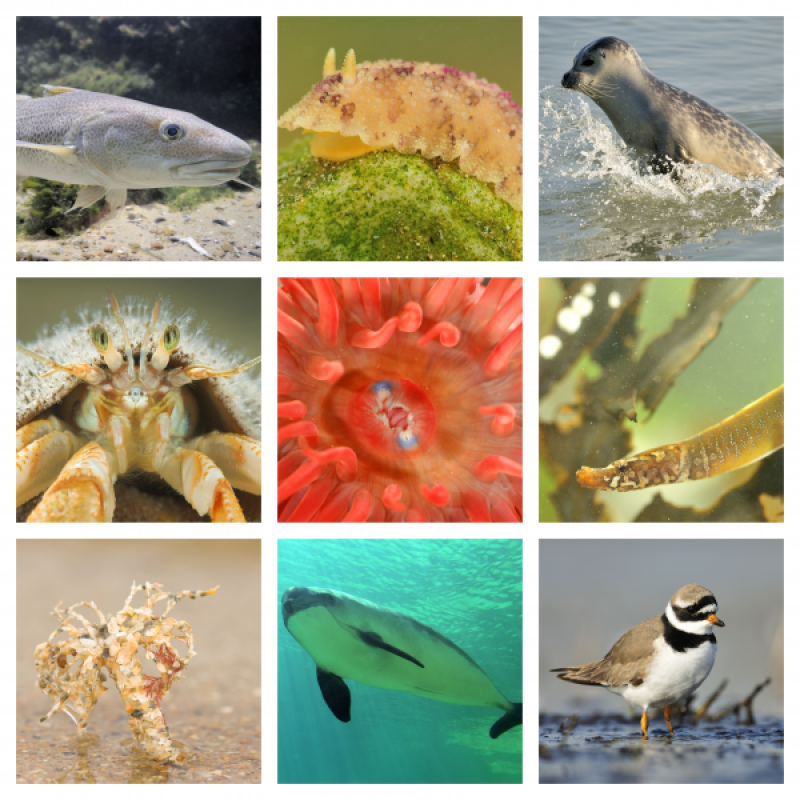 Several large groups can be distinguished in marine ecosystems. This is often done on the basis of where they occur or their size. More than 500 species of plankton help form the basis of the marine food cycle. Depending on whether it concerns plants or animals, these are called phytoplankton or zooplankton respectively. Some species only belong to the plankton group at the start of their lives. This concerns some fish and shellfish. Other species, especially smaller ones, are part of it all their lives. The animal plankton feeds on vegetable or other animal plankton and together they form the menu for fish and other animals.

When phytoplankton and zooplankton die, they sink to the bottom. There, they form an important food source for the benthos. Depending on the size of the organisms and their presence below, in, on or above the soil, the benthos is further subdivided.

But the benthos can also be divided according to place of occurrence. Here, we distinguish endobenthos, epibenthos and hyperbenthos. The endobenthos nestles in the soil, while epibenthos prefers the soil surface. These include starfish, crabs and urchins. Species that live just above the bottom of the water in the water column are hyperbenthos. These include fish larvae, amphipods and comma shrimp. These are a popular snack for fish that live close to the bottom.

Belgian fish fauna are very diverse and consist of 140 different species. The largest group of these in our sea live on and around the seabed and are therefore benthic species. These include species such as sole, dab, halibut and monkfish. The many sandbanks provide shelter and are therefore a breeding ground for many species of fish and shellfish.

Other fish species spend most of their lives in the water column. These are the pelagic species. Examples of these are herring, sprat and mackerel. The pelagic zone covers the entire water column, from the zones above the bottom to the surface. The zone can be further subdivided into different pelagic zones according to depth. Pressure, temperature and light vary per pelagic zone. Pressure increases with depth, while light and temperature decrease.

Marine mammals are the largest species found in the Belgian part of the North Sea. Moreover, their numbers are on the rise too. The most common marine mammal in Belgium is the harbour porpoise, a cetacean that grows to a size of just 70 to 85cm. Harbour porpoises are part of the North Sea population and are mainly found here in the months of February to April. In that period, the numbers can rise to as many as 20,000.

The seal is also very common. In 2018, more were reported than ever before. Usually, it is the common seal. These are slightly smaller than the grey seal and can be recognised by their brown spotted fur. In recent years, however, more grey seals have also been seen off our Belgian coast. Their distribution range is in the temperate and colder parts of the North Atlantic, but they are also found in the Wadden Sea. They usually prefer rocky coasts.

Have you spotted a resting seal? Be sure not to disturb it. Seals lying on the beach and groynes are generally healthy animals that are simply resting. Young seals undergo a stage in their lives when fatty tissue is converted into muscle mass. During this phase, they normally lie on dry land for a few days, and they appear to be ill. So stay at a safe distance of at least 20 metres, keep dogs on a leash and think better of a selfie.

Have you seen a seal injured or in distress? Then you can mainly help by reporting this to Sealife Blankenberge (050/42 43 00). More information about seals can be found in the brochure ‘The sea is teeming with life’.
(^Top)

There are also many seabirds to be found around the coastal waters. Research shows that there are about 60 species of seabirds in the Belgian part of the North Sea, whether permanent or not. We owe this rich variety of species to the diverse fauna of fish, shellfish and crustaceans.

In autumn, more than 1 million seabirds migrate to warmer areas each year via our funnel-shaped section of the southern North Sea. The Belgian part of the North Sea is a very important area for these birds to look for food and rest before they move on.

Three species of terns are a fine example of these migrating seabirds: the common tern, the sandwich tern and the dwarf tern. The birds breed in the outport of Zeebrugge and are very numerous. In winter, the terns trade our regions for warmer Africa. At that time, the shallow sandbanks in our coastal waters are a rich feeding ground for, among others, the common scoter, the grebe and some gull species.

For someseabirds, clear seawater is important in order to obtain prey. You will mainly find these further out at sea. The water is less turbid there.The guillemot, razorbill and gannet dive after their prey there. The red-throated diver, pygmy gull and kittiwake also appreciate the rich supply of food in the sandbanks. Even further out at sea, species such as the Northern fulmar and the great skua can be found.
(^Top)

More than 80% of the North Sea consists of sandbanks: this country therefore bears an important responsibility in protecting them. A sandbank consists of gullies, flanks and a sandbank top. The gullies are characterised by a silty soil; the tops of the sandbank mainly consist of coarse sand. Each part is home to different communities of species. The highest biodiversity is to be found on the flanks and in the gullies.

The biodiversity of sandbanks gets a big boost when sand mason worms are abundant. These are bristle worms that build a long tube. They are considered ecosystem engineers because they retain sediment and modify the habitat by pumping extra oxygen into the soil. This is important for the presence and activity of other soil organisms and also ensures that organic matter decomposes more quickly. In places where the worm is common, the total number of animal species is four to six times higher than in other places. Sand mason worm banks thus create favourable conditions for long-lived species that are under heavy pressure in the North Sea.

Further out at sea, there are also gravel beds. These are located in the gullies of the sandbanks and consist of coarse sand and gravel > 2mm. They are the biodiversity hotspots within the Belgian part of the North Sea. They also have an important function as a breeding ground and nursery for species that need a hard surface to lay their eggs, such as the whelk or dwarf squid. Other species, such as the cuttlefish, dogfish and other shark species, attach their clutches to clinging sponges, moss animals and colonies of hydroid polyps that live on this substrate.

The current species composition of the gravel beds has been impoverished by frequent fishing. There used to be banks of the native flat oyster here, which create their own micro-habitat just like the sand mason worm. However, these were fished empty in just a few years from the end of the nineteenth century.

The wrecks of sunken ships, on the other hand, are hard structures that possess an oasis of biodiversity. During a study of ten shipwrecks in the Belgian North Sea, more than 200 animal species were observed. 46 of them had never before been found in our marine waters.

In 2020, an inventory of all shipwrecks older than 100 years in the Belgian part of the North Sea was made. In those research reports, the historical data, condition and the fauna & flora of the wreck are mapped out. The Marine Environment Service wants to upgrade these shipwrecks to restore their function as a nursery by removing the waste in and around the wreck.
(^Top)