Our production and consumption patterns lay more and more pressure on natural resources, the climate and biodiversity. Our consumption of oil, natural gas, minerals, wood, water, food resources, etc. has increased significantly over the last fifty years due to our improved living standards and population growth.

These production and consumption patterns are based on a linear use of resources :  "extract-make-consume-throw away". This linear economy is associated with the idea of unlimited economic growth and is not viable in a finite world with limited resources. The linear economy also generates an unsustainable amount of waste for the environment. Every year the Europen Union produces 2.5 billion tonnes of waste, or 5 tonnes per capita per year.

The circular economy is intended to be more resilient. The term refers to a system in which the value of products, materials and resources is kept in the economy for as long as possible. Waste production is reduced to a minimum.  Accordingly, its environmental footprint tends to be smaller than that of traditional models. 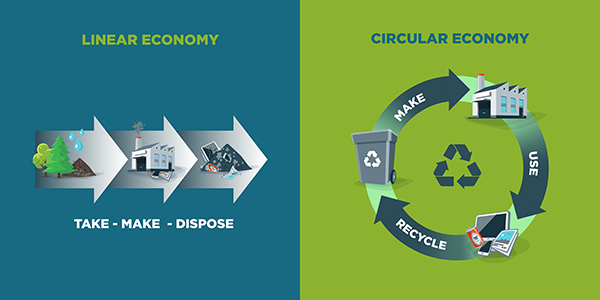 Assuring access to resources has become a major strategic economic issue. The commodities market is highly volatile and can lead to major political and economic instability. Belgium, like other EU countries, has few of these resources and is heavily dependent on imports of these materials, which will eventually become scarcer and more expensive.