Belgium played a historic role in the discoveries made in Antarctica. These early discoveries were made during the Adrien de Gerlache de Gomery expedition (1866 -1934) in 1897. He travelled aboard the sail boat "Belgica". It is also the first crew to have stayed a full winter season in Antarctica. 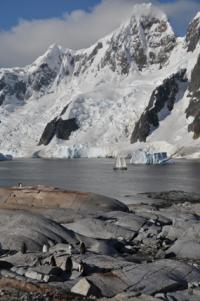 Photo of the Antarctic Landscape

At that time, environmental issues were fundamental in Antarctica. As early as 1908, traces of coal had already been identified. Explorations conducted since then revealed the presence of many other minerals. At present, the inventory of substances found in the Antarctic basement includes oil, methane, uranium, iron, copper, zinc, manganese, cobalt, molybdenum, and even gold and silver. Mineral occurrences were discovered on the periphery of the continent and on mountain tops (on 3% of surface open to air). The remaining 97% is in fact covered with a thick layer of ice about 2 km thick on an average. Added to this is the presence of huge schools of krill found in waters off the continent. These small cold-water shrimps are in high demand by the food industry, pharmaceutical research (especially for cholesterol-lowering drugs) or by scientists for the eco-synthesis action of krills, which is used to bury CO₂ in the ocean.

This vast uninhabited continent with vast resources will be the subject of an original and unique legal system. At the end of the Second World War, during the Cold War, a reserve of natural resources such as Antarctica could have become the subject of real conflicts between nations. Multiple claims especially for land already exist for the continent from the nearest countries ("Contiguous states"), from some industrialised nations or explorer countries that aim to get a return from their investment in science.

The Antarctic Treaty was signed by 12 States in Washington DC, on 1 December 1959. It entered into force in 1961. It will remain in the annals of international law as a unique instrument. It was supplemented in 1991 by the Madrid Protocol on Environmental Protection to the Antarctic.

CCAMLR: Commission for the Conservation of Antarctic Marine Living Resources

CCAMLR is the acronym used for the Commission for the Conservation of Antarctic Marine Living Resources. This Commission has been active since 1982. It was created following the Convention on the conservation of Antarctic marine living resources, signed in Canberra in May 1980. This convention covers the vast waters of the Southern Ocean to the south of 60°S latitude. Its aim is to provide a multilateral response to threats to the marine ecosystem given the increasing interest by commercial fishing in the numerous resources of the Antarctic, including the krill.