More than 140 fish species occur in the Belgian part of the North Sea. These constitute an important natural resource. Many fish species - such as plaice and sole - are therefore intensively fished. There are recovery programs of the Common Fisheries Policy of the European Union to improve the fish stocks of a number of key species in the ecosystem of the North Sea or in the European waters. Certain shark and ray species have now almost disappeared from our region.

Certain fish species are legally protected (twaite shad, allis shad, houting, European atlantic sturgeon, sea lamprey and European river lamprey) or should no more be fished in European Union (e.g. basking shark). Additional information about fishing can be found at the website of the Institute for Agricultural and Fisheries Research (ILVO) or the Flemish Marine Institute (VLIZ).

The twait shad (Alosa fallax) is a herring-like fish that is anadromous, that is, it spends the major part of its life in the sea and only migrates into fresh water to procreate. The twait shads that still commonly occur in Belgium belong to the fallax subspecies. This subspecies is characterised by a golden-brown head, a blue-grey back, a silvery white underside and - often - a row of dark spots (two to eight) on the flanks. The twaite shad can grow up to 55 cm long whereby it remains somewhat smaller and slimmer than an extinct related species in our area, the allis shad (Alosa alosa). The population of twaite shad recovers somewhat due to the improved water quality after being greatly reduced by pollution and overfishing. 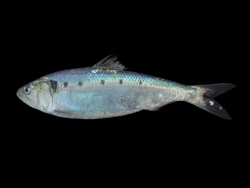 Very little data regarding the present occurrence of the sea lamprey (Petromyzon marinus) and the European river lamprey (Lampetra fluviatis) is available; these species used to occur more in the North Sea. Both are "primitive species" that live partially parasitic on other fish and preferably dwell in the rivers. These species are endangered due to the pollution of rivers, less spawning locations (breeding sites) and construction activities (dams). Hence, the most appropriate measures for the recovery of the species are to improve the water quality of the rivers and estuaries and in particular, the elimination of the bottlenecks of migration, in this case the nets before the estuary. 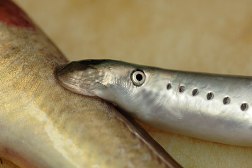 The European atlantic sturgeon (Acipenser sturio) regularly occurred in the Belgian waters till the 19th century and was occasionally caught till the middle of the 20th century. In recent decades, catches had been very rare and this species is probably extinct in Belgian waters. Probably only a few hundred specimens still live in the coastal waters of the Northeast Atlantic Ocean and the North Sea. There are introduction programs for this species in Europe; new, young fish are introduced to locally strengthen the population of the species. 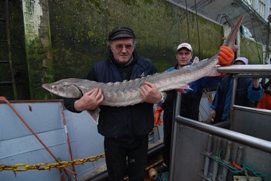 The houting has been extinct since 1940 due to a combination of several factors: overfishing, pollution of the rivers and the construction of dams in the rivers whereby the breeding sites (in the Alps!) could not be reached any more. 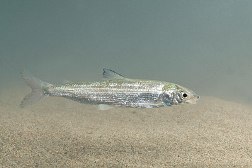