Underwater noise is a neglected but serious threat to marine life. On 30 March 2021, Deputy Prime Minister and Minister for the North Sea, Vincent Van Quickenborne, presented the results of the study on measures the shipping industry can take to reduce underwater noise. He did this for an international audience during a webinar organised by the FPS Health, the FPS Mobility and Transport and the Royal Belgian Shipowners' Association.

The research by TNO shows that there is a set of possibilities for significantly reducing continuous underwater noise emissions: from better design of ships to lower speed. For marine life, from shrimp to whales, this would make a world of difference. Moreover, many of these measures would also be beneficial in other areas. After all, in addition to underwater noise, they can also reduce the ship's energy consumption and air pollution emissions.

Noise pollution is a more serious problem than is generally thought. According to the World Health Organisation, noise pollution is the second-biggest threat to human health after air pollution. And just like humans, noise pollution has a major impact on marine life: more than 150 species are threatened by it. It mainly disrupts the interaction between individuals, such as between prey and predator, and reproduction. Lack of communication causes individuals to “underperform”.

Effects have been observed on all species of marine life and the impact varies by species: invertebrates such as mussels have lower growth rates, higher metabolism, higher oxygen consumption and more DNA damage, among other things. Fish display disrupted feeding patterns, form smaller schools and have fewer offspring. They are also more easily caught by their predators, leaving fewer adults. Marine mammals interact the most with sound and are the most studied. Some species, like the blue whale, adapt their song pattern to rise above the sound of the ship. But this adaptive behaviour takes energy. Marine mammals will also be less successful in foraging (searching for and taking in food) as a result of underwater noise; for beaked whales, for example, this is more than 50% less. 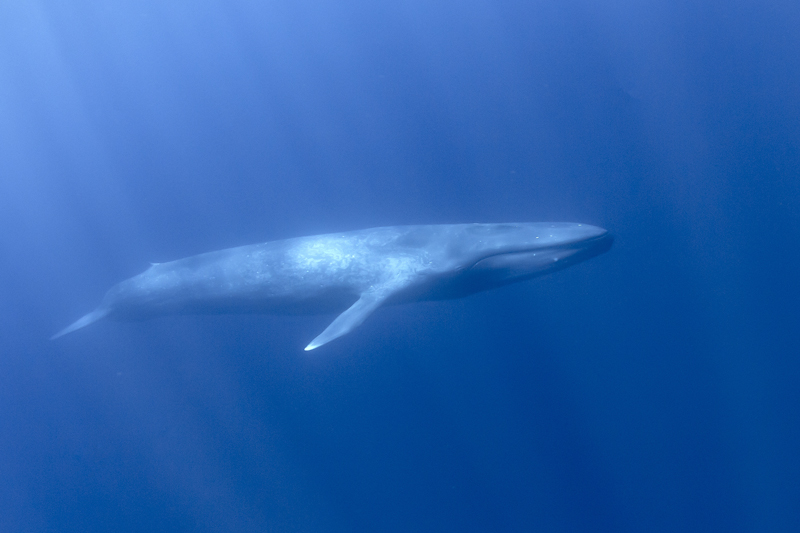 Marine mammals, like the blue whale, use noise to communicate and find food.

There are many sources of underwater noise, both natural and from human activities. In an environmental analysis of this, a distinction is drawn between the impact of acute noise, which is very strong and limited in time (such as an explosion or the driving of wind turbine piles), and background noise, which is continuous. The research conducted by TNO at the request of the FPS Health focuses on the continuous background noise, of which the shipping industry is one of the largest sources. Because the response of animals to underwater noise is so different, there is no scientific consensus yet on an acceptable noise level or which frequency bands to operate within. But even without standards, it is already known that each decrease in underwater noise, however small, already makes a big difference for several species because it reduces the continuous stress. For example, a school of fish will have 8 times more space to communicate with a 6dB drop.

The research shows that every ship has a set of possibilities for reducing its noise emissions and thereby also reducing other emissions (CO2, NOX, SOX, PM or particulate matter). The proposed measures have an impact on the noise generated at as well as the ship's resistance. These include better hull design and reducing resistance through better maintenance of the hull and propeller. The profit that can be achieved with these individual measures does vary greatly from ship to ship and must be considered on a case-by-case basis.

But there are also collective measures that can contribute. The study indicates that reducing the speed of ships in the North Sea to 75% of their design speed will significantly reduce noise and emissions. A significant reduction in CO2 (10%), NOX (11%), SOX (10%), PM10 (10%) is associated with a 1 to 4dB reduction in underwater noise. This seems like a limited effect, but decibel is a logarithmic scale, which means that 1 to 4 dB less ambient noise can result in an increase in communication range or the distance from which animals can perceive a sound by roughly 20 to 40%. This is a modelling exercise to demonstrate the potential within the North Sea, one of the busiest shipping routes in the world. Before putting this into practice, it will be necessary to bring it to an international political level. After all, a level playing field must be maintained when taking such measures.

Deputy Prime Minister and Minister for the North Sea Vincent Van Quickenborne: “The special thing about this study is that it not only focuses on underwater noise, but also on the reduction of CO2 emissions and emissions of NOX, SOX and  particulate matter. This addresses two environmental goals, climate change and air pollution, which are currently being strongly pursued by the shipping industry. I want to take this further as part of my North Sea policy. Belgium is playing a pioneering role at an international level and intends to work closely with the sector, international partners (such as Canada) and NGOs (Oceancare and IFAW). Our ambition is to reduce CO2 emissions by 55% by 2030. By 2050, we are aiming for zero emissions."