In 1967, the Torrey Canyon, a large oil tanker, ran aground on the rocks off the English coast, spilling 120,000 tons of crude oil into the sea. It suddenly became clear that the increasing transport of potentially hazardous substances by sea poses a major social threat to the marine environment.

In order to respond quickly and collectively to an environmental disaster, Belgium, the Netherlands, Denmark, France, Germany, Norway, Sweden and the United Kingdom drew up the Bonn Agreement in 1969. Subsequently, the European Union and Ireland acceded to the Agreement, extending the intervention zone to the Irish Sea and the adjacent Norwegian and British waters. 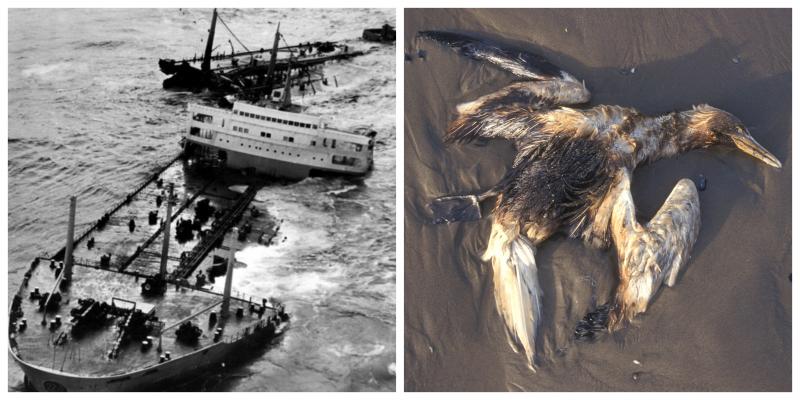 Since 2001, the federal government has had specialist equipment for controlling pollution at sea, in particular for oil spills and hazardous substances. However, it is only suitable for an initial intervention. The Department for the Marine Environment manages the control equipment and uses it in collaboration with the fire brigade's rescue area 1, the Flemish Government DAB Fleet and the Ministry of Defence. Those working with the equipment receive special training. The Civil Security can also use the equipment if necessary. 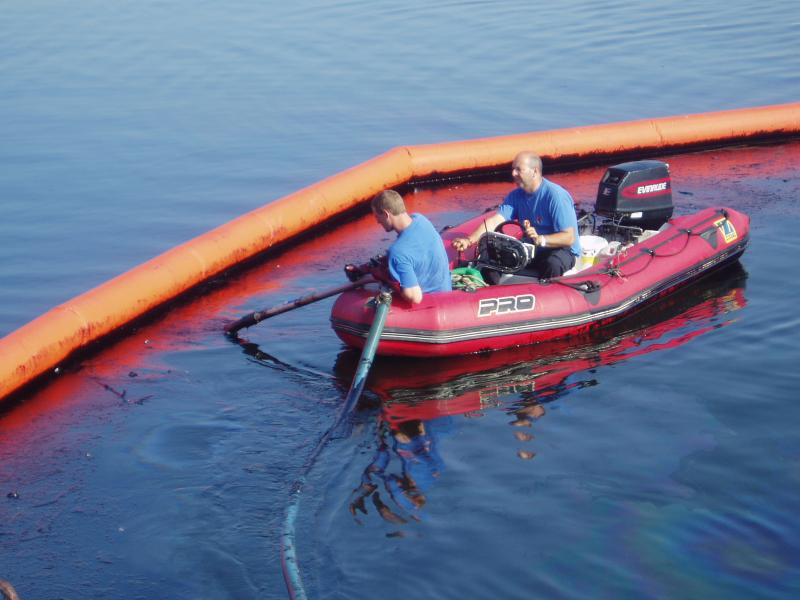 Clean-up of oil for the port of Zeebrugge © DG Environment

In the event of a major oil spill in the Belgian maritime areas, Belgium will receive assistance from the other coastal states under the Bonn Agreement. For some years now, this country has also been able to call on ships via the European Maritime Safety Agency (EMSA). There are also regular (inter)national exercises that prepare this country for potential disaster scenarios.

Environmental monitoring of the site

The Department for the Marine Environment and the Scientific Service Management Unit of the North Sea Mathematical Model (MUMM) are the two competent authorities for tracking down and identifying environmental infringements at sea. This mainly takes place through aerial surveillance.

MUMM operates from an aircraft with a radar system that can detect illegal discharges from ships and has a sniffer tool on board to measure harmful substances in ship emissions. This allows the Shipping Inspectorate to carry out targeted inspections at the ports. There is a collaboration agreement with the Ministry of Defence for the use of unmanned military aircraft that track down and document breaches of environmental legislation. Finally, satellite imagery from the European Maritime Safety Agency is also used to track down potential pollution. The MARPOL network co-ordinates these efforts at a national level. This is a network of federal and Flemish administrations competent for the prevention of pollution by ships. 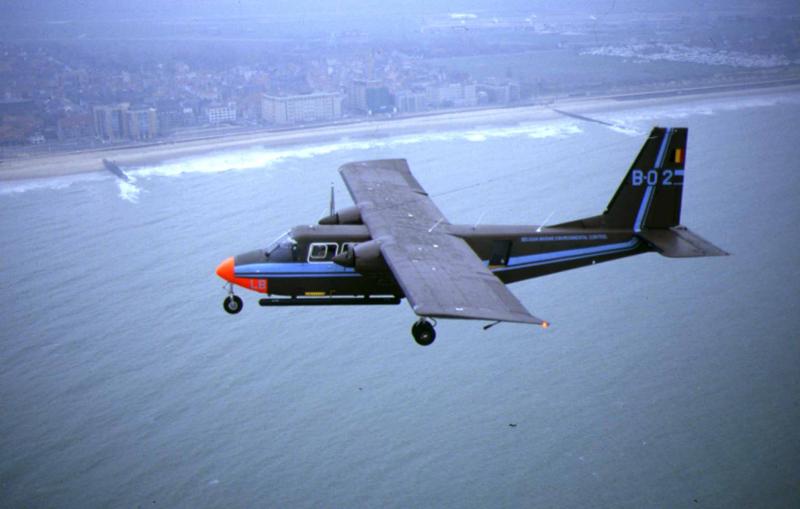 The inspection of marine environmental regulations is at least as important as issuing them. The Marine Environment Act of 20 July 2012 provides for the obligation to inform the authorities in certain cases, for example when an incident could lead to environmental harm or when an activity with a potential environmental risk is planned. The inspections take place both proactively and actively at sea:

A simple explanation of procedures can be enough to help citizens apply the regulations without immediate sanctions. This is always given priority.

The role of the competent public authority increases when there is actual or imminent environmental harm. In this case, the Department for the Marine Environment may organise targeted campaigns or give instructions to be followed by citizens in order to prevent or limit environmental harm.

Officials from the Marine Environment Department also conduct inspections at sea. In collaboration with the Shipping Police and the General Administration of Customs and Excise, there are targeted inspections in which inspectors board ships. They check whether the ship's crew is complying with the administrative and technical regulations. In the first instance, there will be a review of whether the ship's waste is being managed effectively and not dumped at sea. During the inspections, the teams also make the ship's crew aware of the environmental regulations and provide them with examples of good practice. Identified infringements of marine environmental regulations may lead to prosecution, fines and even imprisonment. However, the latter are the exception rather than the rule. The emphasis is on prevention and raising awareness.

Forgotten munitions on the Paardenmarkt sandbank

After the First World War, munitions were left scattered all over Europe. Following the philosophy of the time, and in order to prevent accidents on land, many countries decided to dump these munitions into the sea. Between England and Ireland, for example, there are as many as 1 million tonnes of shells and grenades, while to the north of the Wadden Islands there are probably up to 1.5 million tonnes. The Belgian coast also has a similar munitions dump, the Paardenmarkt. According to most estimates, this ‘absorbent sandbank’ stores 35,000 tons of ammunition five hundred metres off the coast of Heist. It is assumed that one third of these munitions contain ‘toxic warfare gases’, such as mustard gas (also known as Yperite), Clark I and II and phosgene. The landfill was left forgotten after the dumping in the aftermath of the war, until the 1970s. During the preparations for the expansion of the port of Zeebrugge, dredgers collided with several obstacles. A diving investigation showed that these were munitions. Using additional acoustic and magnetic measurements, it was possible to mark out a pentagon indicating the boundaries of the ‘Paardenmarkt’ munitions dump.

The site in Belgium is atypical compared to landfill sites abroad. On the one hand, there is the low water depth and distance from the coast. On the other, the munitions are buried under metres of sand and silt. This reduces the presence of oxygen, which causes the munitions to rust more slowly and the contents to leak less quickly. Elsewhere in Europe, for example in the Baltic Sea, the munitions often lie on the seabed, in direct contact with the water column. When the munitions then start leaking, the pollutants end up directly in the water. The sand and silt on the Paardenmarkt serve as a buffer for any leaks, allowing more time to respond.

Since 1995, DG Environment has been responsible for shielding the site and protecting the local environment. For more than thirty years, for example, it has been forbidden to carry out any seabed-disturbing activities within the designated pentagon. In concrete terms, this means that it is not possible to anchor or fish. The Marine Spatial Plan 2020-2026, drawn up by the Department for the Marine Environment, incorporates this measure, but at the same time provides for the possibility of carrying out research and clearance activities on the site.

In addition, DG Environment, and more specifically the Department for the Marine Environment, is co-ordinating the monitoring of the site through a variety of studies. The aim of these studies is on the one hand to obtain information on the development of the munitions dump (location of munitions, evolution of the silt layer covering them, currents in that part of the North Sea, etc.). On the other, due attention is paid to the toxic substances in the munitions (decomposition process, environmental impact, measurability, etc.) and to potential long-term solutions, such as disposal of the munitions or covering the site.

Where are we today?

Since 1995, divers have been taking samples of the upper sediment layer at various locations in the pentagon almost every year on behalf of DG Environment. The Belgian Defence Laboratories (DLD) and the laboratories of the Royal Belgian Institute of Natural Sciences (RBINS) examine them respectively for the presence of war gases and heavy metals, and for the prevention of explosive remnants (TNT and decomposition products). 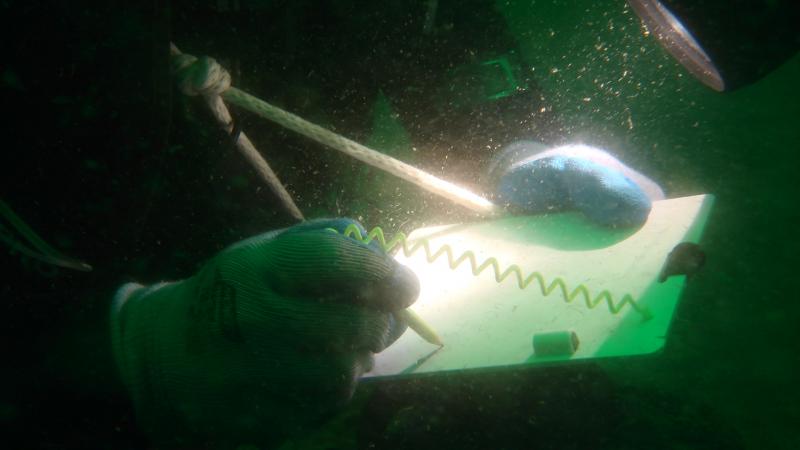 The 2018 monitoring campaign showed traces of explosive remnants and war gases at the centre of the site for the first time, which was confirmed by a second campaign in 2019. The values measured are well below the maximum permitted concentrations for these substances and do not constitute a danger to human health.

In response to the detection of these pollutants, monitoring efforts have been stepped up in order to obtain a better picture of the situation and several additional studies are planned in the coming years in order to develop a sustainable solution for the site.

DG Environment's partners are actively involved too. In January 2020, for example, the DISARM project was launched, a collaboration between the Flemish Institute for the Sea (VLIZ), RBINS, Ghent University, the Royal Military School, the Higher Naval College and the University of Antwerp. Through various studies, these partners aim to address the existing knowledge gaps and evaluate potential management solutions. These studies are subject to a risk analysis in order to minimise risks.

The Department of Maritime Access at the Flemish Government has in turn launched a project to further develop the disposal route. The Department for the Marine Environment brings all these initiatives together under a single strategy, with the aim of a sustainable approach to the ‘Paardenmarkt’ munitions dump.