The great crested grebe is a medium sized bird with a slender neck and pointed beak. In Flanders, the great crested grebe is a nesting bird that occurs along almost all types of inland waterways, but more than 1% of the European population regularly occurs in our coastal waters, primarily during the period from October to April. The number of great crested grebes at sea can change greatly, for instance, depending on the severity of the winter. If the European inland waterways freeze, many grebes are forced to hibernate at sea. They usually swim on the surface and grab their prey with short diving movements.

Because grebes usually swim on the surface, they are sensitive to oil pollution.

The sandwich tern is a typical coastal nesting bird. Just like the common tern and little tern, the sandwich tern is an elegant bird that stands out by its size, but particularly also by its black beak with a yellow tip. The species is seen in our marine environment mainly from March to September with peaks in May. Their number is often more than 1% of the European population.

The highest concentrations of the sandwich tern occur at 25 to 30 km off the coast near Zeebrugge - the ”Vlakte van de Raan”, the “Vlaamse Banken”. During the autumnal migration, they can also be often found in the vicinity of the Thornton Bank.
Sandwich terns usually seek their food in the coastal waters (up to about 15 km from the coast), but they sometimes go even up to 60 miles away to find food for their young ones. The species is noticed only occasionally further beyond in the sea. Their diet mainly consists of fish and during the breeding season, also of polychaetes, a group of ‘sea worms’ (Nereis sp.).

Sandwich terns are very sensitive to disturbances (for example, by surfers), flooding, predators (especially gulls and land predators such as foxes) and pollution in the nesting areas. Moreover, there is an imminent loss of nesting habitat due to expansion of residential, industrial or port areas or due to overgrowth of the open nesting areas. Since the sandwich tern hunts a limited number of species, it is also prone to shortages of food when the right species of prey of the appropriate size are missing. The windmills too sometimes claim victims in the colony of Zeebrugge.

The common tern is a tern-like species that is least bound to the coast: it frequently comes to the inland for nesting. It is an elegant species that distinguishes itself from the other two tern species by the red beak with a black tip apart from its size. The common tern is observed mainly from April to October in the Belgian part of the North Sea, with peaks in May.

Its food mainly consists of small fish and invertebrates such as shrimps and crabs. The number of common terns is estimated at 170,000 to 210,000 specimens. An average of more than 1% (1,900 specimens) of the European population is present in the nesting colony in the port of Zeebrugge with an outlier in 2004 when 4.8% of the population was recorded. During the migration however, an unknown proportion of the much larger North European nesting population settles down in our part of the North Sea. 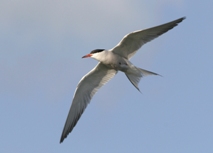 Common terns are susceptible to disturbance or loss of the nesting habitat, predators (especially gulls and land predators), nesting site competition (especially by gulls), pollution (particularly by pollutants that do not or very slowly degrade such as heavy metals or some chemicals such as pesticides and herbicides) and accidents caused by the vanes of windmills (as in the port of Zeebrugge).

The little gull distinguishes itself from most other gull species, not only by its small size but also by the white upper and dark lower wings. This species is present in our North Sea both during the autumnal migration (September-November) and during the spring migration (February to April).

The little gull currently has few threats in the North Sea. Little gulls are less sensitive during the day to disturbances by the shipping or recreational traffic, but the nocturnal disturbances during the sleep may play a role.

The common scoter is the smallest scoter that occurs in our area. The male is completely black and lacks the white wing surface of the velvet scoter (Melanitta fusca). The female is brown with bright cheeks without the prominent bright spots on the head like the velvet scoter.

The species occurs throughout the year in relatively small numbers within 10 km from the coast. It is observed more in the winter; a peak in the numbers is particularly observed in February and March.  Their food is largely limited to shellfish which they bring to the surface. While the common scoter was quite strongly concentrated in the vicinity of the Nieuwport Bank during the nineties (where extensive banks of the ‘cut through shell” (Spisula subtruncata) occurred), the common scoter has in the meantime also found other places and it can now be found in the entire zone between Ostend and the French border with a concentration area at the level of Koksijde. The American jackknife clam (Ensis directus), an invasive species whose number has increased since the last decades is presumably being primarily hunted here.