During their work, the bodies of the CCAMLR Convention address various topics related to the sustainable exploitation of marine resources in this part of the Antarctic region.

In recent years, the diplomats and scientists have focused their efforts on the following topics:

One of the ways in which the Commission (CCAMLR) aims to protect marine biodiversity and its unique ecosystem is by establishing marine protected areas.

In 2002, at the World Summit on Sustainable Development (Johannesburg), the States pledged to establish representative networks of marine protected areas by 2012.

The international community has reiterated that promise at the 10th Conference of the Parties of the Convention on Biological Diversity (Nagoya, 2010), where the Member-States also committed to protect 10% of coastal and marine areas by 2020, and at the Rio+20 Summit in Brazil in June 2012.

The CCAMLR has followed this call since 2004, by adopting resolutions encouraging its various committees and working groups to study the possibility of creating Marine Protected Areas in Antarctica (MPAs). The first MPA (the South Orkney Islands southern shelf) was adopted In 2009 and in 2011, a general framework for the establishment of marine protected areas by CCAMLR was developed.

The goal, fully endorsed by Belgium, is to designate a set of marine protected areas representing all biogeographic regions of the Southern Ocean.

In 2012, two new proposals of marine protected areas were submitted but member states of the CCAMLR could not reach an agreement on this.

The toothfish (Dissostichus, known as such for physiognomic reasons that can be easily guessed) is a large fish that can grow up to 2m and weighs about 80kg. 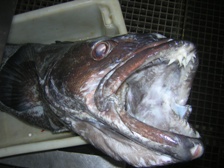 Photo of the Toothfish

It can live beyond 35 years. The toothfish mainly lives close to the bottom. The Patagonian toothfish is the subspecies found in Antarctica. It is very popular for its firm white flesh. Its gastronomic popularity is growing. This popularity is recent. This is why intensive commercial fishing dates from the 1990s only. Due to its lifestyle, the toothfish is often caught by trawling, which has a destructive effect on habitat. Despite the fact that this fishing is prohibited, the toothfish is regularly being fished illegally. Due to its very slow reproductive cycle - often after decades - this fish is particularly vulnerable to overfishing.

The krill (or Euphausiacea) is the generic name of small shrimps roughly 1-2 cm long living in cold waters. There remain a little under one hundred different species of krill. Adults live in large groups or schools that sometimes cover hundreds of square kilometres, whereas eggs and larvae can be found at depths of over 1000 m. The krill biomass amounted to 650 million tonnes, making it one of the most abundant animal species on the planet. The krill species present in the Antarctic is mainly the Euphausia superba. Krill is the main source of food for many animals in Antarctica: whales and other cetaceans, penguins, seabirds, fish and large crustaceans. Krill is therefore fundamental to the food chain in Antarctica. 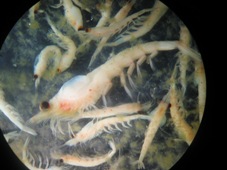 Krill falls prey to industrial fishing in the Antarctic. It has high caloric value and is rich in omega 3. Due to this krill is in high demand in the nutritional additives, cosmetics and animal feed sectors. Various bodies and NGOs are beginning to sound the alarm. Krill, and the entire ecosystem that depends on it, is the victim of overfishing. It is necessary to intensify control on quotas and close fishing areas! In fact, more than 200,000 tonnes are caught per year and the number is only increasing. Not only human activities are threatening the krill. Its future is also compromised by global warming and by the presence of toxic substances in its habitat that krill subsequently passes into the food chain.

Catch limits are agreed for each fishery through decision rules thus ensuring long term sustainability of the fishery. These limitations and other operational aspects defined in the conservation measures determine when, where and how the fisheries are operated.

Fisheries are monitored based on the information submitted to the Secretariat in real time or at short intervals during the fishing season.

CCAMLR uses several systems to monitor compliance of fishing activities in the Convention Area, for example by granting licenses to vessels, tracking the movements of vessels and the transshipments.

Members are required to apply these mechanisms including:
- a system of controls,
- a vessel monitoring system and
- a catch documentation scheme.

The Convention is particularly concerned about illegal, unreported and unregulated fishing (IUU).

CCAMLR is playing pioneering role in detecting, deterring and eliminating illegal fishing activities. The catch documentation scheme is an essential tool in this fight, as is preparing the lists of illegal, unreported and unregulated vessels.