In our daily living environment we come into contact with “non-audible” ultrasound and sound of high frequencies when using devices such as “Mosquito” products, products for repelling animals and birds, movement detectors, range finders and remote controls. In this section you will find information on the sound emissions of such products, the regulation and the health risks.

For detecting movement, alarm systems make use of ultra sound. The working principle is based on the Doppler effect. An ultra sound wave is transmitted. This wave reflects against all objects in the environment of the transmitter and is registered by a receiver. If the sound wave is reflected by a moving object, the frequency of the sound wave changes (due to the Doppler effect). The receiver detects this change, which leads to activating an alarm (the light or a siren goes off). In alarm systems detection mechanisms other than ultrasound can be applied: e.g. infrared light or radio waves.

These systems make use of a sound frequency above 25 kHz. The higher the frequency, the more accurate the measuring can be. In this, the frequency of 40 kHz is most often mentioned. One uses this type of device in photography, for depth measurement, as parking radar. An alternative is the use of laser measurement. For the underwater applications (navigation and ranging by sonar) the ultra sound is the most interesting. For remote controls also infrared rays can be used.

The following figure gives an overview of these applications (limited to 60 kHz). The intensity of the sound is expressed in immission relevant sound power. 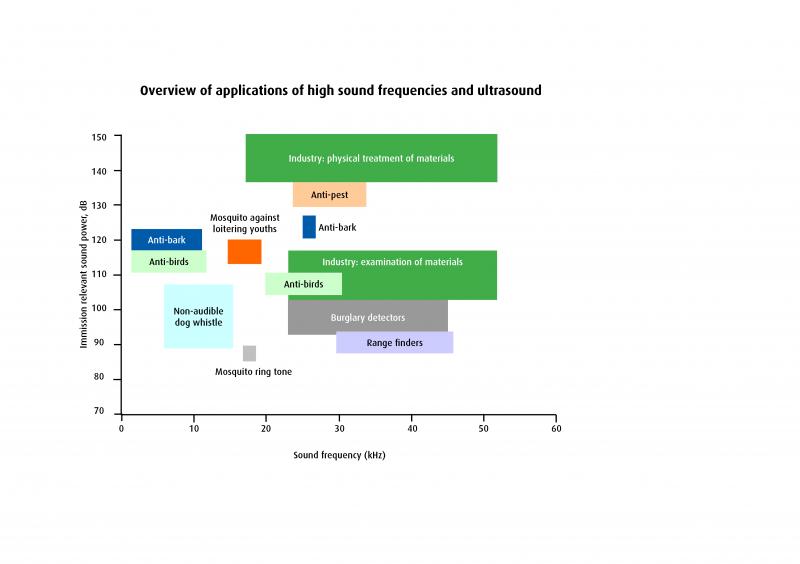 In the figure, also industrial applications are shown, for physical processing (mixing, grinding, emulsifying, extracting substances) and examination of materials. Medical applications (diagnostics, therapy, surgery) mostly make use of an ultra sound with a frequency in the MHz range and are not depicted in this image.

All consumer products, including ultrasonic devices, must be safe. For some products limiting values are imposed and measuring procedures are drawn up so as to provide the producer with the possibility to prove the safety of his products in a coherent way. These limits and measuring procedures are included in the harmonised standards (These are technical standards the titles of which are published in the Official Journal of the European Union). Unfortunately, there are no harmonised standards for ultrasonic products. The manufacturer must take the international guidelines and recommendations in this connection into account. There are no specific rules for the marking of ultrasonic emissions.

Are there health risks?

In principle, devices like movement detectors, distance meters and remote controls cannot cause any nuisance. Only devices against animals and loitering youths seem capable of causing unpleasant sensations and subjective complaints (headache, ear ringing, fatigue, dizziness and nausea), due to the high frequency sound they produce. With the Mosquito device against loitering youths, this nuisance is the very goal. This device produces (according to the Superior Health Council) at a distance of some metres a sound pressure between 85 dB and 100 dB.

Our service has measured the sound emissions of some ultrasonic animal repellers. The limit of 75 dB, recommended by the INIRC/IRPA and by the Canadian government, is exceeded with some devices at a distance of less than 5 metres. This is why it is recommended to install an ultrasonic animal repellers at some metres in relation to the places where there may be people. It is also good to know that there are devices which work continuously, but also devices which only transmit a signal when movement is detected. This latter one is less annoying. There is no danger of hearing damage.