On February 19, the international conference "Climate change and ocean conservation" took place on the initiative of the Belgian ministers of Energy, Environment and Sustainable Development and of the North Sea. The Declaration was very well received at the conference, and continues to receive support. 33 countries and 11 organisations have already signed the Declaration. 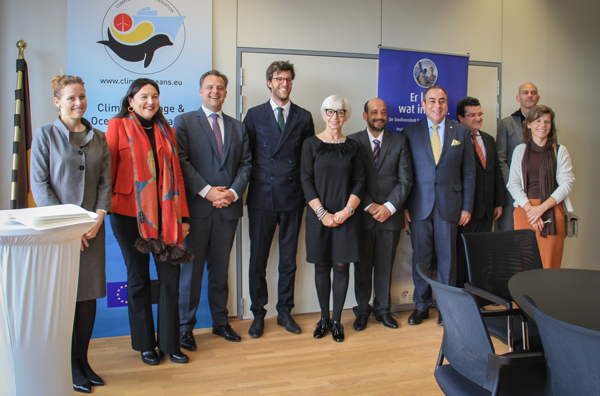 The Brussels Declaration calls for progress in several ongoing processes, in particular those regarding the negotiation of a new Convention on high seas biodiversity and the definition of new objectives for the Convention on Biological Diversity.

The Declaration also has the great merit of bringing together the many existing commitments on oceans and climate in a single document that countries can sign up to, and calls for an appropriate reaction to the UN Climate Commission's Oceans Report, which will be published in September 2019.

The Declaration was signed by countries and by organisations

Many countries support the Declaration: European countries but also countries from Africa, Latin America, Asia, and many islands. Chile, where the next Climate COP (COP 25 or "the Blue COP" as the Chilean Minister for the Environment calls it) will take place in December 2019, has committed itself to promoting the objectives of the Declaration during this conference. The following countries, among others, have signed the Declaration: Belgium, Denmark, Finland, France, Luxembourg, the Netherlands, Portugal, the United Kingdom, Sweden, Albania, Bosnia-Herzegovina, Norway, Iceland, Monaco, Gabon, Ivory Coast, Morocco, Cape Verde, Chile, Costa Rica, Honduras, Nicaragua, Peru, Tajikistan, Dominican Republic, Commonwealth of Dominica, Marshall Islands, Sao Tome and Principe, Seychelles, Saint Lucia, Saint Kitts and Nevis, Saint Vincent and the Grenadines...

During an event organised by the Permanent Representation of Belgium to the United Nations in New York in early April, the Belgian ambassador invited countries to join this growing group. The new signatories were invited by Ministers Marghem and De Backer to a second signing ceremony on May 7 at the FPS Public Health.

"Unfortunately, the state of biodiversity has become extremely alarming. With the Brussels Declaration, the federal government wants to commit itself, together with the ministers, ambassadors and representatives of 33 countries and several organisations, to tackling the impact of climate change on the oceans. I call on other countries to join us in order to strengthen our action at European and international level", declared Marie Christine Marghem.

Belgium is already working hard to put the Declaration into practice. Recently, Belgian and European climate and ocean negotiators met to see how they can include the oceans in the concrete objectives of the next climate COP. Belgium, together with other countries, is also one of the driving forces of the "Friends of the Blue COP" group. 2019 will be a decisive year, as the ‘blue’ COP at the end of the year is a unique opportunity to take climate measures to protect the oceans.

More concretely, Minister De Backer announced on May 7 that Belgium officially supports the 30x30 initiative (https://www.oceanunite.org/30-x-30/), a call for action to protect 30% of the oceans by 2030. Belgium has already protected more than 35% of the Belgian part of the North Sea, but to really protect the oceans against climate change, we need to establish a vast network of marine protected areas. Belgium will promote this objective in all policy processes on climate, oceans and biodiversity.

"Only through international cooperation will we be able to halt climate change and its adverse effects on our seas and oceans. Everyone must make an effort. That is why I am signing the international commitment to protect 30 percent of our oceans by 2030. However, Belgium is even more ambitious than that, and already protects 35 percent of its part of the North Sea. Together we can keep our seas and oceans clean", concluded Minister Philippe De Backer.